On October 3, the reunification of Germany is celebrated every year, because on this day in 1990, after 40 years of separation in Federal Republic of Germany (FRG) and German Democratic Republic (GDR), a united state was formed again. 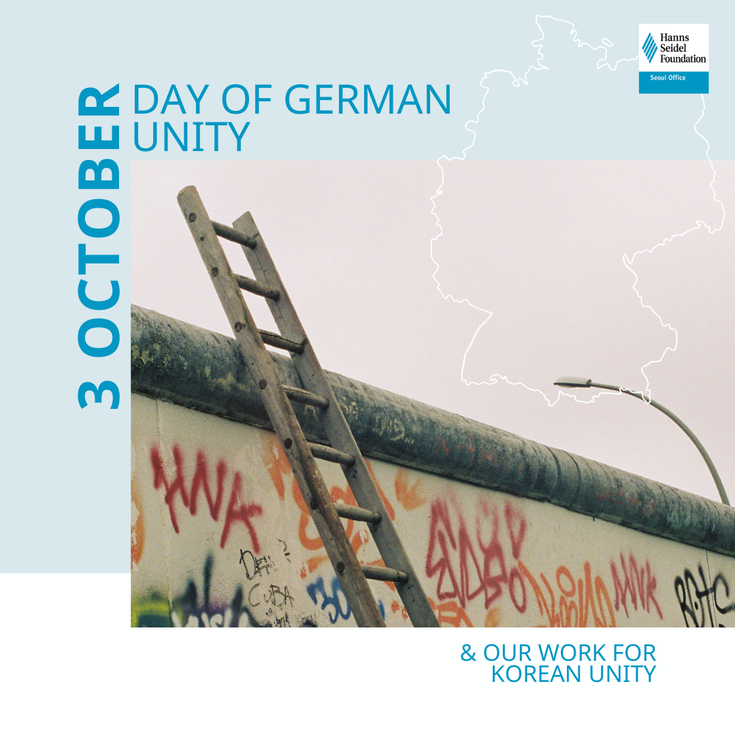 After the end of the Second World War in 1945, Germany was divided among the victorious powers of the USA, France, Great Britain and the Soviet Union. The system differences between the USA, France and Great Britain on the one side and the Soviet Union on the other, quickly led to disagreement about the future procedure with the divided Germany. This resulted in the division between West and East. Two very different forms of government and ideologies were now implemented on the two sides. In the West, the principles of the rule of law and welfare state dominated in a parliamentary democracy based on the American model. In the East, the new social order was based on the socialist model of the Soviet Union, resulting in the real socialist dictatorship of the Socialist Unity Party of Germany (SED).

1989 now saw the unexpectedly rapid events surrounding the fall of the Berlin Wall and the eventual reunification in 1990. A new policy on the part of the Soviet Union under Gorbachev, growing pressure from within and a collapsing economy are just a selection of factors that brought about the dissolution of the GDR. Today, October 3 is Germany's most important national holiday, where people look at a united Germany with gratitude and pride. However, even 31 years after the fall of the Berlin Wall, the aftermath can still be felt and is always a topic that needs to be reappraised, discussed and reflected upon.

Although the developments and situations of different countries are usually difficult to compare, some do share some aspects among themselves. This is also the case with Germany and the still divided Korea. As a reunified country, it is not Germany's task to transfer its own history to other nations, but much more to generously share its own experiences and observations, if asked to do so. Our partners in Korea have always paid close attention to the developments in Germany in order to draw their own conclusions. We, as the Hanns Seidel Foundation Korea, have always endeavored to act as a point of contact in this regard and to support appropriate projects to promote inter-Korean rapprochement.

Examples of this work are some of our most recent projects.

For example, the workshop on conflict analysis and resolution for peace development on the Korean peninsula in cooperation with PACSC Asia at George Mason University Korea, which will take place at the Goseong DMZ Museum, among other places.

Also on September 17, our senior researcher Dr. Hyun-Ah Choi supported the dialogue on inter-Korean cooperation for social, cultural, and economic exchange as a judge in the 2021 Online Korea Peace Debate Competition.

Furthermore, we established the “SLUT UP” (Open up) Korea monument in the Paju border region in cooperation with the Korea Institution for Peace and Cooperation.

Environmental protection in the border regions is also a big part of our work to support sustainable cooperation and improvement of local living conditions, such as the cooperation with The East Asian-Australasian Flyway Partnership, International Union for Conservation of Nature, and World Wildlife Fund.

Inter-Korean relations are always dynamic, so in project implementation we are equally flexible in considering where, when, and with whom we can work most effectively on our focus areas. The Day of German Unity motivates us to continue this work, considering the German experience and the unique characteristics of Korea, to promote dialogue and peace.